My Trip to Martha Stewart’s Party 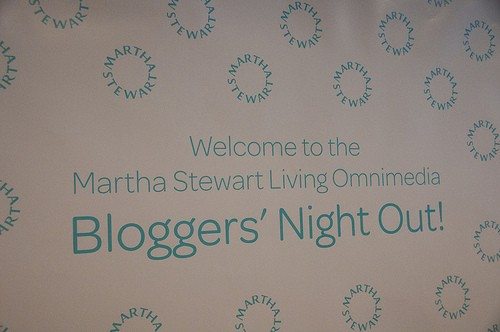 A few weeks ago, I received an email invitation to attend a cocktail party at the Martha Stewart Living Omnimedia offices while I was in New York City.

I have to tell you very honestly, I don’t believe my feet touched the ground as I flew out of my chair and began doing the biggest happy dance I can remember in a long, long time.

I remember Little Buddy asking, “Mama, are you okay?” My response was breathless as I giddily replied, “I’m going to Martha Stewart’s!” Of course he thought that meant her home and asked me if I would be sure to take a look at her chickens for him. Does that tell you how Martha Stewart has been invited into our home and family? 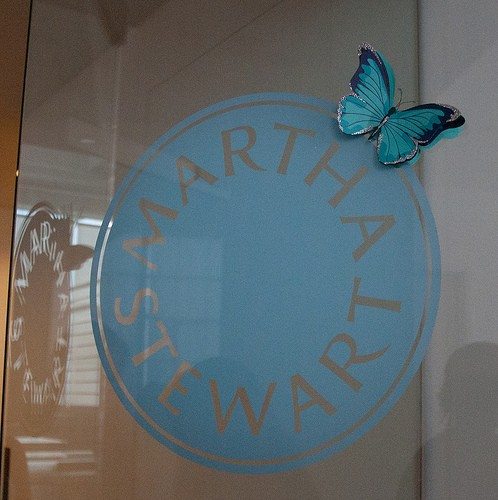 I stood outside my hotel waiting in the line for a taxi. I got there early since my friend Kristen gave me a tip that the taxis were a bit slow that night. Forty-five minutes later, I was nothing if not nervous. The party started at 6:00 P.M. and it was 5:50 P.M. already. I was on 57th Street and the party was on 26th. Taxis were breezing past and periodically stopped to pick up people ahead of me in the line. One by one, the front of the line got nearer and nearer to me.

Finally, I noticed a car with a family getting out of it right at the end of the spot where taxis were to pickup and drop off passengers. I quickly asked if he could assist me and get me to 26th Street for a party. Next thing I know, I’m loaded into the car and am being driven off to the party.

As I’m talking to the driver on my way, I learn he actually is not part of a car service but a private driver. He laughed that he thought my accent was neat and I looked like I needed some help. So he decided to help me.

Yes, this very sweet driver helped me get to the party on time! The funniest part? When we arrived, I asked him how much I owed him. He told me, “whatever you think, but you don’t have to pay me anything. I was just trying to help you. Here is my card. Tell me when you want to be picked up and if you need any other help this weekend, call me.”

Can you believe it? We quickly began sharing all kinds of great stories of his family and how long he’d been driving for the family he’d dropped off when I saw him earlier.

As we entered the actual party, there were beautiful stations setup sharing delicious drinks, appetizers, and beautifully decorated tables. 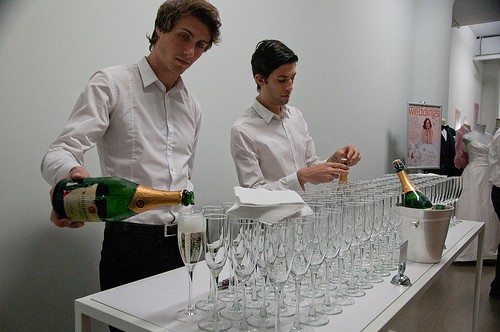 The first of which was the champagne table. 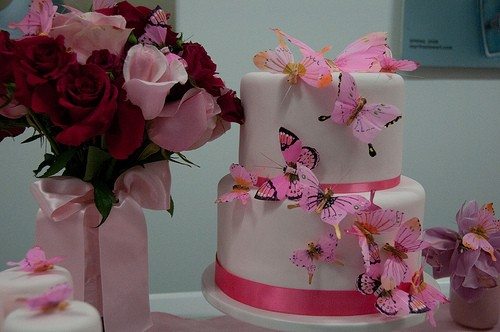 Just look at these cakes that were part of the Weddings section of the party. 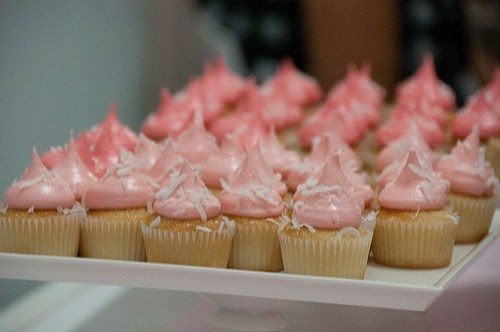 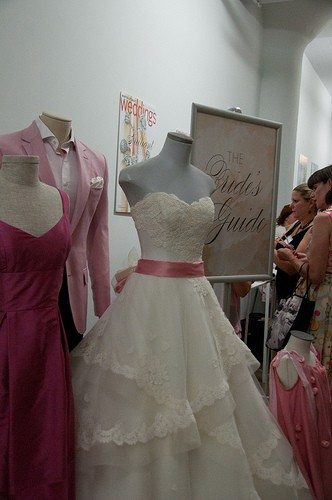 And gorgeous attire. Oh, the folks at Martha Stewart Living Omnimedia sure know how to make everything beautiful. 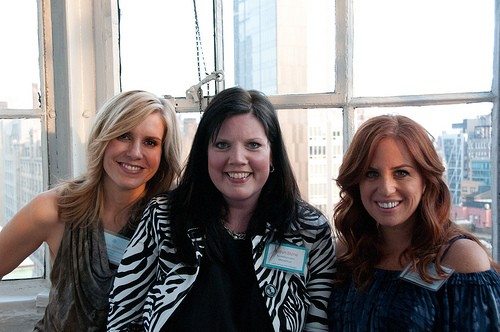 Speaking of which, after getting all nervous about seeing Alexis Stewart and Jennifer Hutt of WhateverRadio.com. I finally got up the nerve to walk over and introduce myself and ask them for a photo.

Let me tell you something, these two ladies are drop dead gorgeous. Ubber-slender, perfect skin, and extremely friendly. I wish I’d gotten a photograph of their shoes. They were amazing. Take a look over at MattBites for a glimpse at Alexis’ heels. 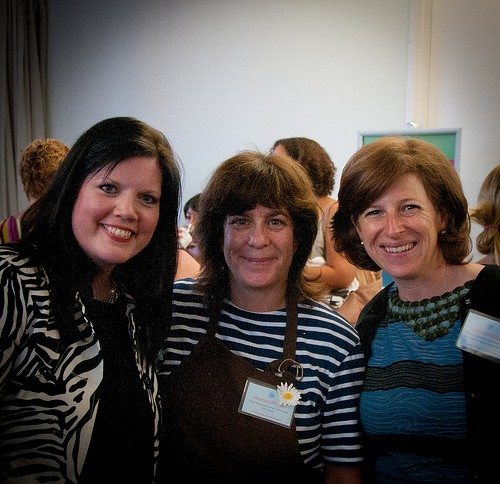 Earlier I mentioned Santa Claus, and I have to tell you another quick story about the night. At one point in the evening, I turned and introduced myself to a super sweet lady. She introduced herself by saying, “I’m Hannah and I work in crafts here at Martha Stewart Living Omnimedia.” I know my eyes had to nearly pop out of my head. I said, “Are you Hannah Milman?” Her shy reply was, “Yes.” And then, I said, “Saying Hannah Milman works in crafts is like saying Santa Claus works in toys!”

She was absolutely one of the nicest, most gracious ladies I have met. She shared a couple of crafts with us and then we chatted for a while longer. I felt as if I had known her for years. 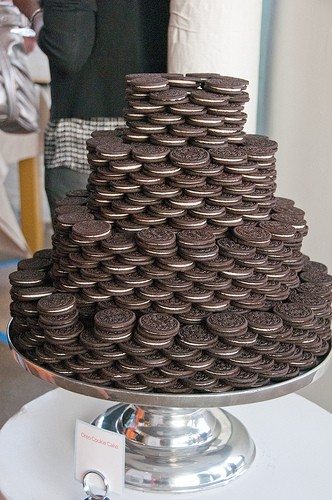 Just look at this cake made of Oreo cookies. Genius! Although, I was constantly afraid someone {namely ME!} was going to bump the table and cause this beautiful creation to come tumbling down. 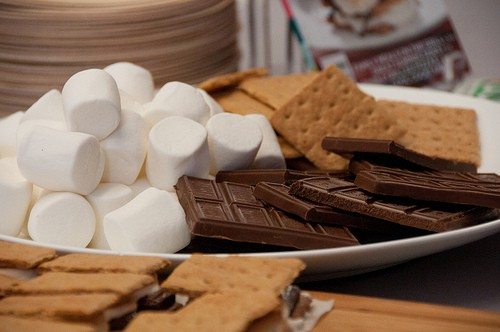 And S’mores may never taste the same after having them at Martha Stewart’s offices. 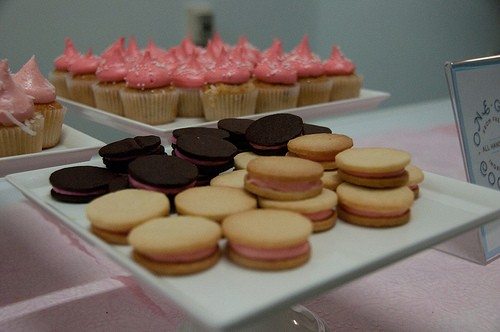 And these confections from One Girl Cookies were out of this world!

It was an amazing night and I am so very thankful to have been invited and able to attend. My trip to NYC was absolutely a fairy-tale from beginning to end! 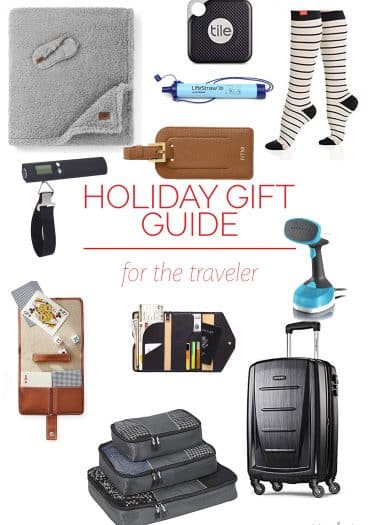 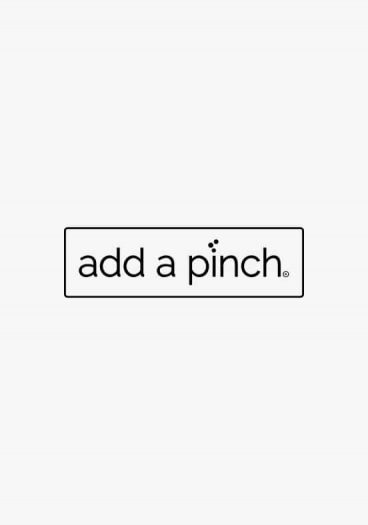 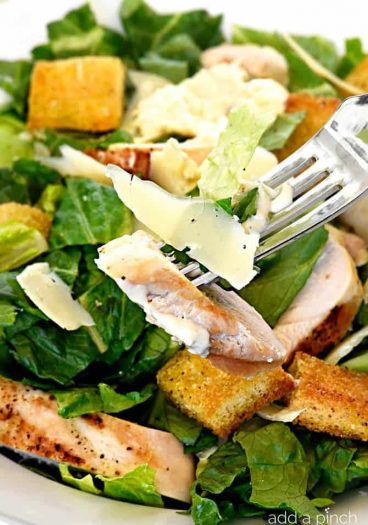